Root Two is a company founded by the highly experienced industry professional and ex-Marshall Design Engineer Steve Dawson. Way back in 1975, as a curious teenage rock guitar player, Steve opened up his first valve guitar amp to see what was responsible for making that wonderful sound. The amp in question was, and indeed still is, a 1973 Marshall JMP 50W and it was to become a testbed for an intense investigation into what made these things tick.

After years of research and picking up ‘the knowledge’ from books and any local mentors he could learn from as he was developing his practical skills, he eventually found himself able to comfortably manipulate the sonic character of audio electronic circuits, as well as troubleshoot and repair faults on several different brands of such equipment.

As the years went by and several Electronics qualifications later, he started to make a living in the industry. By the 90s he was successfully dividing his time between touring with iconic 60s band The Animals, and running a boutique audio electronic workshop from home catering to local as well as global customers. This encompassed servicing and repairs as well as bespoke work. 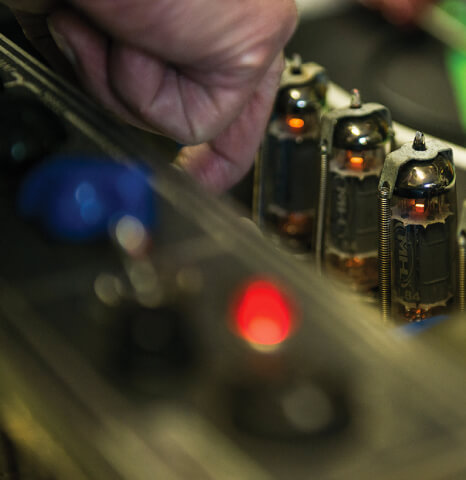 In January 2005 he gained a position as a Design Engineer in Marshall Amplification’s revered R&D department, where he stayed for nearly ten years.

During his time at Marshall, Steve designed brand new products such as the Vintage Modern series, the Class 5, the JMP 1Watt (for Marshall’s 50th anniversary in 2012) and his swansong, the Astoria series. He also had major involvement in the design and development of the JMD hybrid series.

He worked on reissuing iconic models from their past catalogue such as the 1962HW original spec ‘Bluesbreaker’ combo which was also released for Marshall’s 50th anniversary.

He also worked on reissuing special items such as the JTM45/100 dual output transformer amplifier, as used by The Who and Small Faces back in 1965, to commemorate the 40th anniversary of the first 100W stack. Only twelve of these were made originally! Another was the Super100JH Jimi Hendrix amp, which celebrated his use of the early JTM period models during 1966 and 1967.

The time eventually came to move on to pastures new, which found Steve embarking on a new journey at the helm of his own company. This enabled him to continue the work for which he has a passion, on products with which he has an affinity and still loves to play his guitar through.

Has your amp’s sound degraded over time, or maybe stopped working altogether?

This website uses cookies to improve your experience while you navigate through the website. Out of these, the cookies that are categorized as necessary are stored on your browser as they are essential for the working of basic functionalities of the website. We also use third-party cookies that help us analyze and understand how you use this website. These cookies will be stored in your browser only with your consent. You also have the option to opt-out of these cookies. But opting out of some of these cookies may affect your browsing experience.
Necessary Always Enabled

Any cookies that may not be particularly necessary for the website to function and is used specifically to collect user personal data via analytics, ads, other embedded contents are termed as non-necessary cookies. It is mandatory to procure user consent prior to running these cookies on your website.